I couldn't let this one pass unmentioned. As someone who plays guitar a bit, and a fan of riffs and tasty guitar playing from many players, over many decades, Eddie Van Halen was a monster player. Really devastating and sad news today at his death from cancer. What a loss. One of the few lyrical melodic shredders. You can SING Eddies solo's, try that with some of the pretenders. Probably the most influential guitarist since Hendrix. You may not have liked everything he did, but you always knew it was him.

I first saw Van Halen with Black Sabbath in 1978 at De Montfort Hall in Leicester (May 31st). Fantastic show. They were on their first UK tour, about halfway through, and they were on fire. I was there as a Sabbath fan truthfully, and Sabbath treated them well, they had great sound and they absolutely 'went for it'. I saw them once more after that and while I wasn't a HUGE fan later on, I thought when David Lee Roth departed and Sammy Hager came in they got a new lease of life. So, much as I love the debut album, 'Panama', 'Jump' and the great DLR material, here I'd putting 'Right Now' to remind you just how good this guy was. Great piano riff, magical guitar solo and a really thoughtful lyric along with an equally provoking video. Everything perfectly in it's place. Fantastic song.

I was aware Eddie had been struck with cancer but I thought, like many it seems, that this was sorted out. That he had actually beaten it (no pun intended), Obviously not the case then. 'Right Now' your life is happening, and 'Right Now' your countdown clock is also ticking. 'Right Now' I'm cranking up some Van Halen. 'Right Now', click 'play' below...

Paul Kossoff And The 'Sea Of Tranquility'...

Well, blogger just HAD to do it, and in an 'upgrade' to their site, that worked perfectly previously, they have now completely f****d up and made far more difficult most of the stuff I use and do here. Wow, progress eh! If it works DON'T fix it!! It's not like I do anything technical but now it's more difficult to upload and generally get something on here. So lets see how this works out. I'll do my best!

Just thought I'd bring to your attention some more Youtube viewing to keep you amused during the current and continuing 'situation'. Hopefully everyone is keeping well out there and as I'm almost recovered from the 'Fire And Water' issues, work has started (well a little bit) on the upcoming 'Highway' extravaganza. Don't hold yer breath as magazines won't be coming for a long while yet!

In the meantime, and with next to nothing on the TV, you might like to check out the video and the links below. 'Sea Of Tranquility' (their spelling not mine!) post new Rock music musings frequently. Obviously you may not agree with all the comments, the order things come in, or the selections. That's all fine. I don't either - but that's not the point. It's always interesting to hear how other people rate their music, and what they think about artists we may, and may not, like ourselves. Often it may prompt you to play something and reconsider it. Not always a bad thing. Host Peter Pardo encourages you to leave your own favourites in the comments of the Youtube videos - so if the need to have your say takes hold, you can make your feeling known.

Check out some of the other videos too. Lots there to enjoy on the 'Sea Of Tranquility' channel.

One Album Wonders, Part 4 (Including KKTR)

I keep telling myself I'll stop doing these 'reminder' posts but here we are again. It is a little bit sobering to think I opened this blog with a piece from an earlier fanzine where I talked about Koss being 60. You can find the post right at the start, in July 2011. There's really not too much to add to that. The years have torn by, but the feelings are still the same and certainly the 'history' of our hero hasn't changed. Paul is fixed in time, forever young, and yet here we are, left with what would have been... Paul Kossoff at 70.

Happily Paul's profile remains high. He's on the front page of 'Guitarist' magazine this month, and the large feature there shows just how much guitar players and writers of music think of his contribution to the world he inhabited, and which he continues to influence. I think that's a pretty big deal. It's tough to make a mark out there. For me personally, Paul is still the player I most enjoy listening too. His ear for tone and the depth of feeling in his playing never cease to move me, and things I liked in the 70's I still like now. It's good to see this music pass through time with little ageing in it's delivery or sound. It's all still pretty 'current'. Not always the case when we look back. There is plenty of stuff out there that sounds exactly like the era it came from, but not Free. 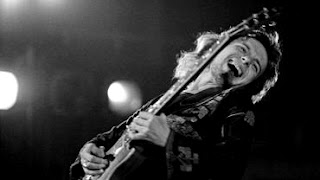 So, today pick out some of your favourite Kossoff moments and enjoy them. I'll be pulling out 'KKTR' and giving it a spin from end to end. I've not played it for quite a while actually, having been concentrating on the early Free albums, but as the FAS works through the history of the band I'm getting to the 'KKTR' period, and prior to that I'm looking forward to 'Highway', which I always felt contained some beautiful guitar work from Paul. Lots to celebrate then on this, Paul's 70th birthday.


'Hold On' 1999 Remix.
Excellent Kossoff guitar on the end section.

OVERSEAS POSTAGE HAS GONE UP AGAIN!!
That's the second time THIS YEAR!! 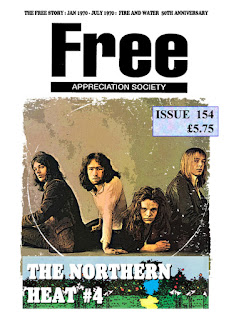 The forth and final issue in our 'Fire And Water' extravaganza has now gone out to all subscribers. Working through our continuing history of the band, to mark the 50th anniversary of the albums, as they were released. This HUGE 88 PAGE ISSUE (the biggest FAS magazine ever) deals with the various releases of 'Fire And Water' as we move through June of 1970 and beyond.


2nd exclusive introduction by Simon Kirke
especially for this issue.


Here we look at the issues of the album from all over the world. The different labels, the variations in them, the different covers and changes made to it, where the different mixes were used and more.


The magazine is full of new information, gathering together the history of the band in release form. Details include pressing plant variations, along with label deviations, inaccuracies, matrix numbers and sleeve variations. Crazy amounts of specific data from all over the world.


Issue #154 also includes the day to day diary of the band, running from January 1970 to the end of July. This covers 16 pages and gives information on what Free were doing in a daily format. Lots of information about recording, TV shows, radio sessions and more along with gig adverts, flyers , posters, tickets and reviews!


Posted out to ALL subscribers today. 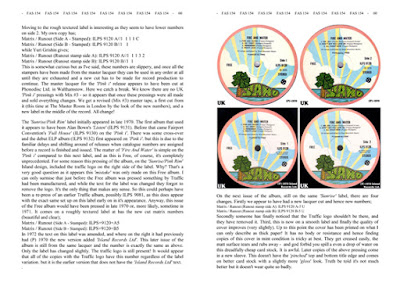 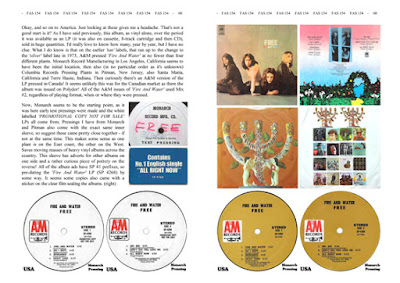 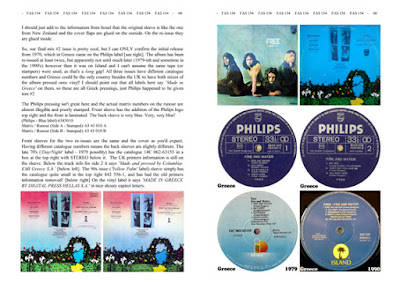 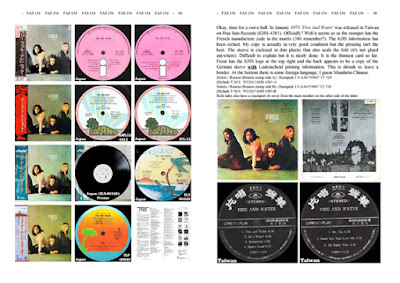 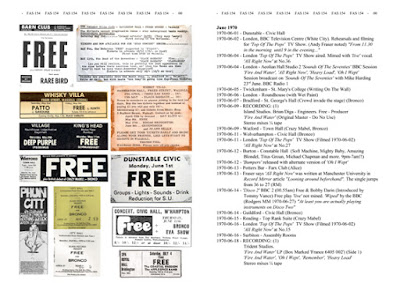 Not got a subscription?

Details are in the blog further back or you can simply email and ask about getting this and other issues.

Okay, FAS #153 should have settled pretty much everywhere now and, as #154 won't be here until early next week, let's have a bit of fun while we wait...

Here's the audio to the covers mentioned. Enjoy! (or not!).
The final track is one of the strangest things you'll ever hear...

Not sure what's going on? Then get a copy of the magazine. 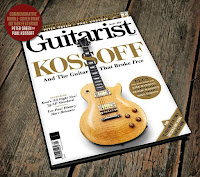 There are two different covers – one featuring Paul Kossoff's legendary 'All Right Now' Les Paul, the other the late Peter Green. You'll find both at your local newsagent, NOW.

"In Guitarist magazine's new issue, we take a look at one of the guitars that rewrote music history – Paul Kossoff's 'All Right Now' Gibson Les Paul. The article features rare close-up shots of this fabled instrument and the history behind it."


This is a nice BIG article. Lots of great photographs and well written pieces on both Kossoff himself and the guitar over a number of pages, some 15 in all. 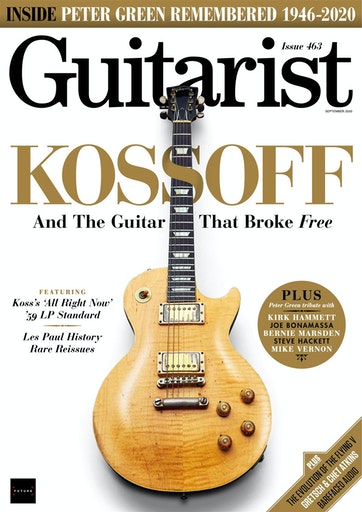 Out to all subscribers literally 10 minutes ago! 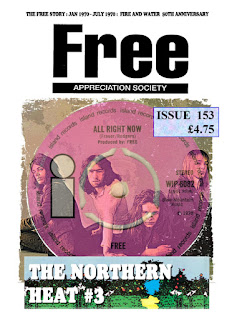 The third of our four 'Fire And Water' issues has now gone out to all subscribers. Working through our continuing history of the band, to mark the 50th anniversary of the albums, as they were released. This 56 page issue deals with the various releases of 'Bumpers' and 'All Right Now' as we move through April to July of 1970.


Exclusive introduction by Simon Kirke for this issue.


Here we look at the releases of the 2LP 'Bumpers' compilation all over the world. The different labels, the different covers... and the different versions of tracks included! Also press and ads from the period.


Then the big one. 'All Right Now' from every corner of the globe. Different picture sleeves, labels, edits, promo's, test pressings, 7", 12" and CD. Island Records, Philips, Festival, A&M, Polydor, Radio-Televizija Beograd. Over 200 full colour images and everything you ever needed to know -  hell, even things you didn't!


The magazine is full of new information, gathering together the history of the band in release form. Details include pressing plant variations, along with label deviations, inaccuracies, matrix numbers and sleeves. Crazy amounts of specific data from all over the world.


This is the most in depth look at this period of the Free history EVER and continues the series of issues running through until the end of August over #151, #152, #153, #154 (which is a bumper issue!)


Not got a subscription?


Details are in the blog further back or you can simply email and ask about getting this and other issues. 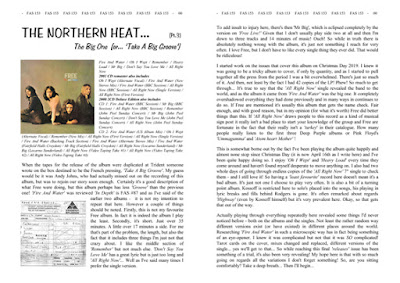 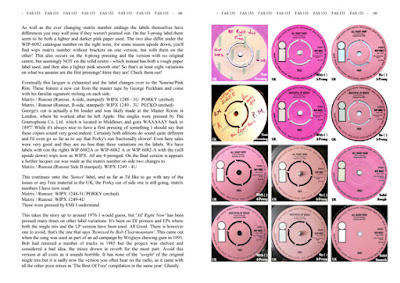 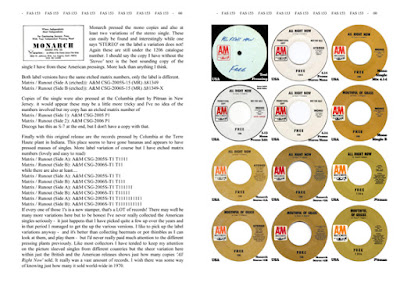 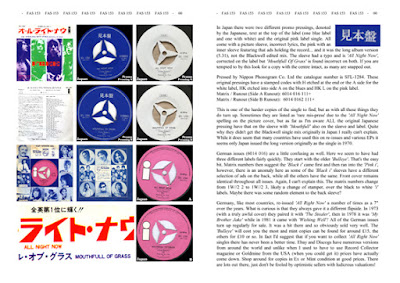 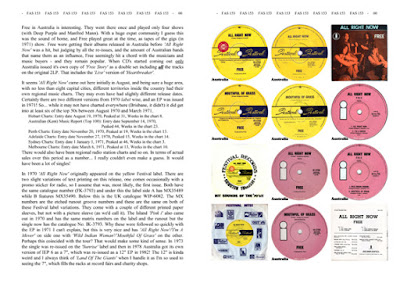 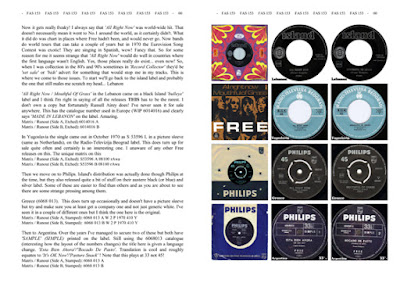 This site is an extension of the FAS magazine, which was established in 1979. Here you’ll find some of the articles from the magazine along with things that can’t be included, like video and interviews. It won’t be updated daily, weekly or even monthly but when there is something interesting to put up, or I have time, I’ll try and keep it interesting.

If you’ve just found the site and are interested in the FAS magazine you can email for subscription details to fasarticle@aol.com. Thanks very much. 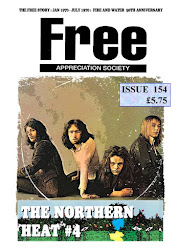